News
Advanced Search
Sign in
Focus on a race Interview

9 questions to discover a marathon : In Flanders Fields-marathon

André Mingneau, the race director of ‘In Flanders Fields-marathon’ is presenting the marathon he is in charge of.

Hello, on September 13th 2009, you’ll be organizing the In Flanders Fields-marathon . Can you tell us where it is located?

It’s in “Flanders”, which is the Dutch speaking part of Belgium. Our most famous city is Brussels, also known as the capital of Europe.

The race is running from Nieuwpoort to Ieper. Ieper, or Ypres, is very famous because of the battles of the First World War.

This will be the 10th edition of the race. Why was it created in the first place?

I created it in honour of my grandfather. He and his four brothers went all five to WW1, the farm of their parents was only a few miles from the Front line. All five came came back alive which was very unique!

What kind of route have you set up for the runners? How would you describe it?

It’s a very flat race along the exact border of the front line of the First World War 1914-1918. It’s on a traffic free road from Nieuwpoort, by Diksmuide and with arrival on the historic market place of Ieper.

You really run between the fields with the cows as spectators…

Last year we have 450 arrivals, some of them are really race runners but most of them run for their own pleasure and because of the history of this place.

Do you organize other races during the Week-End? If so, on what distances?

At that time of the year, what kind of weather can we expect?

Mostly Sunny, between 16 and 21 degrees, that’s the average

Have you planned festivities around the marathon?

No, but maybe there will be some animation in Ieper

The marathon finished, what advice would you give a runner who has never been to Nieuwpoort-stad or Ypres before? A good restaurant, a fancy sightseeing?

A restaurant in Ieper, there are a lot, and of course a sightseeing around the battlefields of “Flanders Fields”, there are so many military cemeteries and it’s surely worth a visit. 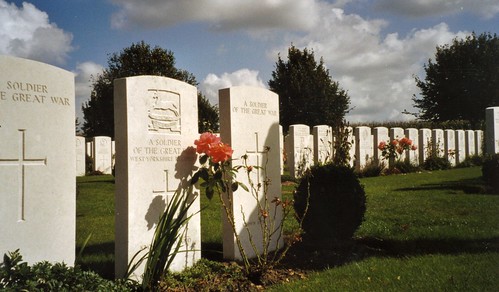 In a single sentence, what would you tell the readers of 42k195 to make them register for the In Flanders Fields-marathon?

The ‘In Flanders Fields-marathon’ may help to keep people’s mind open against useless violence and terror, that’s why our English, American and Canadian friends talk about the “marathon for peace’!

In ‘14-’18 the victory in World War One was more important than personal survival. This time participation in the ‘In Flanders Fields-marathon’ is more valuable than the first place in the race. Therefore, participate and run this attractive marathon.